The cheapest ticket to Toronto found for each month in 2021 based on historical flight searches by Cheapflights users.

When is the best time to fly to Toronto?

Average Toronto flight ticket prices and weather conditions for 2021 and 2022 by month.

The best time to fly to Toronto is during January, but great deals can be found at other times. July sees the temperatures in Toronto peak to their warmest. July tends, on average, to see the most amount of rainfall.

When is the best time to book a flight to Toronto?

The best time to book flights to Toronto is 60 days before your desired departure date. The cost of your flight will likely increase significantly if you book two weeks in advance of your flight.

Which day is cheapest to fly to Toronto?

The cheapest flights to Toronto are usually found when departing on a Wednesday. The departure day with the highest cost at present is Sunday.

What time of day is cheapest to fly to Toronto?

Flights in the morning are typically the cheapest time of the day to fly to Toronto. Flights in the evening are usually the most expensive.

When to fly to Toronto

Peak Season:
June to August is when most visitors arrive on trips to Toronto. The weather is at its best and events are in full swing. These include the annual Toronto Caribbean Carnival (Caribana) Festival, Canada Day celebrations, Toronto Jazz Festival and the Beaches International Jazz Festival.

Shoulder Season:
February to May and September to mid-November are good times to visit. The summer crowds have thinned and the weather is still good. This is when the Toronto International Film Festival takes place and when leaf peepers arrive for the glorious fall foliage. The start of February is when the WinterCity Festival takes place. Three festivals in one, WinterCity consists of the WOW! Series at Nathan Phillips Square, the Warm Up Series at Toronto’s cultural/tourist attractions, and the restaurant promotion, Winterlicious.

Off Season:
Late November to January is, in general, off season.

Located on the northwestern shore of Lake Ontario, Toronto is the largest city in the country – a cosmopolitan conglomeration of cultures. In this city, you can walk – and eat – your way around the world. The Irish, Greek, Indian, Chinese, Brazilian, Portuguese and Polish communities, to name just a few of the 100 or so groups who call Toronto home, give the city a profusion of senses. For travellers arriving on flights to Toronto, it’s a city of sights, smells and flavours.

Toronto is thriving. The Distillery District is a relatively “new” neighbourhood, the old red-brick buildings and warehouses are now galleries, artist studios, boutiques, cafes and brasseries. The Four Seasons Centre for the Performing Arts on Queen West is a glittering space with world-class acoustics. Near Chinatown, the Art Gallery of Ontario has been transformed by Frank Gehry. In Yorkeville, the Royal Ontario Museum has been spruced up with a new wing by Daniel Libeskind. The Gardiner Museum stands across from the museum; it’s Canada’s only ceramics museum.

When the city gets too busy, Dundas Square or the Beaches offer a respite. A ten-minute ferry journey from the Harbourfront will deliver you to the Toronto Islands.

How long is the flight to Toronto?

Travellers flying to Toronto, Canada from other parts of Canada have a few different options for their trip. The main airport is Toronto Pearson International Airport, Toronto, but when you are checking out Toronto flight deals, you may find yourself flying into any one of Toronto’s four commercial airports. If you are coming from Montreal, you can expect to get to the Billy Bishop Toronto City Airport on the Toronto Islands in little more than one hour. If you are coming from the other side of the country, give yourself a bit more time to reach your destination. From Calgary, your flight into Toronto Pearson International Airport will take 3h 40m. A flight from Vancouver will run anywhere from four to six hours.

Where can you get direct flights to Toronto from?

How do you get from the Toronto airports to the city centre?

If you will be flying into the Toronto Pearson International Airport, a taxi ride to the city centre will run you about C$60 and take about half an hour. If you decide on a more affordable option, the Toronto Transit Commission can get you into town for C$3, though you will be looking at a trip that could take 75 minutes, and you will likely need to make some transfers. The 192 Airport Rocket will connect you with the subway. Both taxis and buses can be found on the ground floor of Terminals 1 and 3.

Getting to the city centre from Billy Bishop Toronto City Airport can be as simple as a free shuttle ride from the airport to Union Station, which can connect you to the local subway, buses, and trains. You could also spend around C$20 for the 10m taxi ride to the city centre.

What are some things to do in Toronto?

Toronto is a city full of cultural diversity, delicious dining, plentiful shopping, amusement, and exciting attractions. Toronto Island Park is a great destination for families and independent travelers alike, with its amusement rides for children as well as trails and beaches. For shoppers looking for a unique and eclectic experience, the St. Lawrence Market offers a variety of fresh and prepared food ranging from baked goods to raw fish and meat. There are many parks, coffee shops, and art galleries scattered throughout the city, and you would be wise to check out Ripley’s Aquarium of Canada before venturing up into Canada’s National Tower. The CN Tower features dining, entertainment, and breathtaking views from an astonishing 553.33 meters up.

Do I need a passport or visa to fly to Toronto?

Canadian citizens do not need a passport or visa to fly to Toronto, as they are not crossing any international borders.

How popular are flights to Toronto this year?

Toronto has seen a 70% decrease in demand for flights to the city compared to last year.

See alternative destinations where airfare is generally forecast to be close to Toronto flight prices. 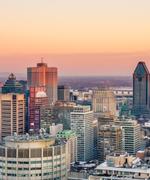 Cheap tickets to Toronto found by our users in Canada as recently as April 14, 2021.

Other local departures to Toronto from Canada

See all airports in Toronto, select one to find and compare flight prices.

Not set on Toronto? See the cheapest flights to Canada. Airfare prices updated on April 14, 2021.