The best prices found for YYC flights for June, July

Cheap flights to Calgary found for this year

Late deals on round-trip flights to Calgary, departing today and this week

What is the cheapest month to fly to Calgary?

The cheapest ticket to Calgary found for each month in 2022 based on historical flight searches by Cheapflights users.

When is the best time to fly to Calgary Airport?

Average Calgary flight ticket prices and weather conditions for 2022 and 2023 by month.

When is the best time to book a flight to Calgary?

Booking 60 days in advance of your planned departure date is, on average, the best time to get cheap flights to Calgary. The general trend is that the closer you book to the departure date, the more expensive your flight will be.

Which day is cheapest to fly to Calgary?

Wednesday is currently, on average, the cheapest day to fly to Calgary. Flying on Sunday will result in higher flight prices.

What time of day is cheapest to fly to Calgary?

At the moment, flights in the afternoon are likely to offer the best value for money for your Calgary trip. A flight in the evening will more often than not be of higher cost.

When to fly to Calgary

Calgary is the gateway to the Rocky Mountains. Banff, Lake Louise and Canmore are just a couple of hours west by car along the Trans-Canada Highway.

Peak Season:
June and August host the festivals. Many travellers book cheap flights to Calgary in the fall when the weather is still pleasant and the foliage glorious.

Off Season:
Winter is off-season unless you’re a skier or snowboarder. Then it is the only time to go.

Oil, beef and cowboys… and so much more. Travellers on cheap flights to Calgary will discover that the city has many surprises. Best known as a winter sports and eco-tourism destination, home of the world-famous Calgary Stampede and an important oil city, it has a thriving arts and restaurant scene, excellent shopping (the lack of PST is a bonus) and cosmopolitan festivals.

Calgary’s setting in the foothills of the Rocky Mountains with the Bow and Elbow rivers flowing through offers unparalleled recreational opportunities. Anglers can fly-fish for rainbow and brown trout right in the centre of town or go kayaking, canoeing and rafting. More than 550km of paved pathways take bikers, roller bladers or walkers through parks, city neighbourhoods and along waterways.

The Stampede, held each summer since 1912, celebrates Calgary’s heritage with rodeo, chuckwagon races, agricultural shows and grandstand show. Western Canada’s largest museum, the Glenbow Museum, is close to the Calgary Tower, international jazz and folk music festivals and even a Dragonboat Festival round out this city’s rich offerings.

Looking for additional flight deals? Check out deals from Ontario to Calgary.

How long is the flight to Calgary, Canada?

Flights from Quebec City to Calgary, Canada range from six-eight hours, while flights from Vancouver are just over an hour long. You can fly from Ontario to Calgary in 5h-8h, depending on the number of stops your flight plan has. Those flying from Winnipeg, Canada, can fly to Calgary in two or three hours.

Where can you get direct flights to Calgary from?

How do you get from Calgary International Airport to the city centre?

There are plenty of methods of travel for getting from the Calgary International Airport to downtown Calgary. One option is to rent a vehicle. There’s a convenient Rental Car Centre inside the airport, at which you can select from a wide range of vehicles and even select an RV if you plan to travel a longer distance. This Car Rental Centre is home to several major car rental companies. Another option for travel from the airport is a taxi, and while this may be the more expensive option, it makes the 25-minute drive to the downtown area simple and quick.

Those seeking a less expensive option can use either the shuttle or the public transit available. The Calgary Allied Airport Shuttle runs every day and is available to pick up passengers every 30 minutes. This shuttle also connects with several large hotels near the airport.

There are two main public transit routes that connect with the Calgary International Airport. There is a bus service that connects the airport to downtown Calgary. Like the shuttle, these buses are available every 30 minutes. There’s also the CTrain Station at the airport, which connects passengers with downtown, as well as the northwest and south sides of the city.

What are some things to do in Calgary?

Warm summers and snow-filled winters make Calgary a great place to visit year-round. The Calgary Zoo is a great way to spend the day with the family. There are multiple national parks nearby that offer breathtaking views and memorable photo opportunities. As Canada’s largest living history museum, The Heritage Park Historical Village features hundreds of exhibits to see, as well as places to shop and dine.

For the more active family or group, there are hiking and bike tours that take you through art districts, historic districts, and beautiful trails. As a major city, there is also plenty of nightlife, complete with exquisite dining options and upscale shopping.

Do I need a passport or visa to fly to Calgary?

Since Calgary is located in Canada, there’s no requirement for passports if travelling from another location in Canada.

Travellers booking cheap flights to Calgary can expect warm summers (up to about 23 degrees Celsius or 73 degrees Fahrenheit) and snowy winters. Winters are particularly cold (dipping to about -15 degrees or 5 degrees Fahrenheit) except when the Chinook winds blow and warm up the city. Snowfall is heavy at times, particularly in the mountain regions.

Calgary has a bus system and a light-rail system, the C-Train, running through the city. You can transfer between the two easily, and the C-Train is free anywhere downtown. If you want to rent a car, you can find any of the car rental companies at the airport or around town. Taxis are also convenient, and reasonably priced. Be careful if you decide to walk. East-west blocks are very long, and it can take you longer than you’d expect. To help pedestrians get around, the city has the “Plus-15” system, which is a series of enclosed walkways connecting downtown buildings above street level. You can access the walkways at streets marked with a “+15.”

One of the biggest airports in western Canada, Calgary International Airport (YYC) is located 13 miles (20km) northeast of downtown Calgary. The spacious and sunny terminal handles more than 12 million people every year, making it one of Canada’s busiest airports.

Calgary is an important business destination in Western Canada, but even more people fly into Calgary Airport for a taste of Alberta’s wilder side, with easy access to Glacier National Park, the pristine Lake Louise, and hiking opportunities in Banff. The busiest time to fly here is definitely during the Calgary Stampede though, when the city is filled with more cowboys than you can count!

What airport do you fly into for flights to Calgary?

Most people fly into Calgary (YYC) if they book a flight to Calgary. Calgary is conveniently located just 9.3 km from Calgary’s city centre.

How popular are flights to Calgary (YYC) this year?

Searches for flights to Calgary have seen an increase of 164% this year.

See alternative destinations where airfare is generally forecast to be close to Calgary flight prices. 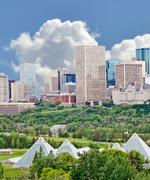 Find the best Calgary flight deals for you

Cheap tickets to Calgary found by our users in Canada as recently as June 30, 2022.

Other local departures to Calgary from Canada

Not set on Calgary? See the cheapest flights to Canada. Airfare prices updated on June 30, 2022.