The best prices found for YEG flights for June, July

Cheap flights to Canada found for this year

Late deals on round-trip flights to Canada, departing today and this week

What is the cheapest month to fly to Canada?

The cheapest ticket to Canada found for each month in 2022 based on historical flight searches by Cheapflights users.

When is the best time to fly to Canada?

When is the best time to book a flight to Canada?

The price you pay for your flight to Canada may vary depending on when you book. For the best chance of a lower fare, look to book 60 days in advance of your trip. Fares are likely to increase a fortnight or so before your departure date.

Where are the most popular flight destinations in Canada?

When to fly to Canada

A four-season destination, there really is no bad time to take cheap flights around Canada.

Peak Season:
Varies according to province and activity. Unsurprisingly, the summer months are when most travellers book cheap flights around Canada to make the most of the great outdoors. For skiers and snow-boarders, November through March is peak season.

Off Season:
The weeks following Christmas and the New Year celebrations are traditionally soft.

With its stunning array of destinations – the Rocky Mountains and national parks in British Columbia to Niagara Falls in Ontario, the Nahanni National Park Reserve in the Northwest Territories to the Bay of Fundy in the Maritimes – and friendly, safe and cosmopolitan cities, it’s no wonder that travellers from around the world search for cheap flights to Canada.

And, with such natural wonders on the doorstep, it’s not surprising that so many Canadians choose to book domestic flights and vacation “at home”.

There’s plenty to see and do. The festivals alone would provide a challenging itinerary. Spanning the country from West to East, Vancouver hosts the largest fireworks competition in the world, Calgary has the stampede, Toronto the International Film Festival, Quebec City the Winter Carnival and Nova Scotia the Celtic Colours International Festival.

For centuries this has been a country offering better opportunities and the different communities all live tolerantly together enhancing Canada in both tradition and cuisine.

How long is the flight to Canada from Canada?

Flight times across Canada can vary significantly. East-West flights will have a travel time of 6h 50m to 9h 10m or longer, depending on the number of stops and the amount of wait time. Popular routes across Canada average 3h to 5h flight duration. Domestic flights are generally inexpensive and Canada flight deals are available for simple transport across the country.

What cities offer direct flights to Canada from Canada?

There are a number of direct flights across Canada with service available from Air Canada, West Jet, and a number of other airlines. Direct flights can be found connecting most major cities, including Toronto, Vancouver, Quebec City, Montreal, Winnipeg, Halifax, Ottawa, Calgary, and others. Connecting flights are also available from multiple cities in the country, with more than 150 airlines offering service for domestic flights throughout Canada.

What is the best way to travel around Canada?

Canada has an extensive network of well-maintained roads and highways. Of course, it is also a large country, so driving all the way across can take multiple days. RV trips across the country are common, with many parks and RV camps along the way in various cities and territories. Toronto and Montreal both have subway systems available for tourists, which offer access to most parts of the cities. Buses are plentiful in Canada, as well, with most major towns having their own well-developed bus system. VIA Rail offers train service, although fares are rather expensive and routes are limited. Bikes are great for getting around major cities, and rentals and loaners can be found in major hotels and tourist areas from a number of providers. Some tour companies even offer guided rides.

What are some things to do in Canada?

Canada is home to the Canadian Rocky Mountains, Niagara Falls, and plenty of national parks and reserves in the Northwest Territories. Plus, cities like Toronto and Montreal offer a glimpse of cosmopolitan, upscale city life with a touch of history and plenty of shopping. Vancouver hosts an annual fireworks competition that is the largest in the world and Toronto is home to the International Film Festival. There is a Winter Carnival in Quebec City every year and Calgary has its own stampede.

Do I need a passport to fly to Canada from Canada?

All domestic flights within Canadian borders (or recognized territories) do not require Canadian nationals to carry a passport. All that is required for citizens is a national ID or driver’s licence. International visitors arriving in Canada will need to present a passport that is valid for at least three months beyond their expected departure date. Canadian nationals leaving the country will typically be required to present their Canadian passport for entry into other countries, although exact requirements will vary by destination.

Canada is an enormous country and its climate ranges from long, cold winter nights in the Arctic Circle to the mild seasons of British Columbia. Both Montreal and Quebec City have warm summers that can become hot and humid. The cities’ winter season lasts from October to early May with cold and snow. You‘ll find the warmest summers in Toronto. The bitter winter cold has become part of the country’s culture. In Ottawa you can enjoy the warm summer days, but head inside to escape the chilly nights that can drop below 0 C. Snow starts to fall in October and temperatures can drop close to zero.

Via Rail, the national rail service, connects most cities. It also offers two kinds of national rail passes. The Canrailpass offers 12 days of unlimited rail travel. The North American Rail Pass covers travel for 30 days on any VIA train in Canada and almost any Amtrak train in the United States.

Greyhound’s bus network covers more than 1,000 destinations in Canada and offers cross-border links to many cities in the U.S.

Public transit: several cities have subway, metro or light rapid transit service. In Vancouver it’s the SkyTrain, in Calgary the CTrain, in Edmonton the LRT, in Toronto the subway, in Ottawa the O-Train and in Montréal the metro. Fares are cheap, about $2 per adult.

One of the neatest ways of getting around Canada is by ferry. Several provinces have seasonal and year-round services to nearby islands and coastal regions.

How popular are flights to Canada this year?

Flights to Canada have seen a 162% increase in demand compared to the previous year.

See alternative destinations where airfare is generally forecast to be close to Canada flight prices. 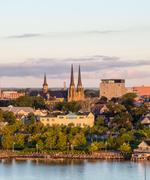 Popular regions to fly to in Canada

Not sure where to visit in Canada? Start by selecting one of the most popular places in Canada below to filter down your possible destination.

Select your preferred flight destination in Canada from the list below.

Select your preferred route to Canada from Canada below

Not set on Canada? See the cheapest flights to Canada. Airfare prices updated on June 30, 2022.