Flights to Toronto Island in 2022

The best prices found for YTZ flights for January, February

Cheap flights to Toronto Island Airport found for this year

The cheapest ticket to Toronto Island found for each month in 2022 based on historical flight searches by Cheapflights users.

When is the best time to fly to Toronto Island Airport?

When is the best time to book a flight to Toronto Island?

The best time to book flights to Toronto Island is 60 days before your desired departure date. The cost of your flight will likely increase significantly if you book two weeks in advance of your flight.

How long is the flight to Billy Bishop airport in Toronto, Canada?

Flights from Ontario, Canada, to Toronto are around 7h with just one stop. This travel time can increase to as many as 16h with multiple stops. You can find flights from Montreal to Toronto that are just over an hour long with no stops.

Where can you get direct flights to Billy Bishop airport, Toronto from?

How do you get from Billy Bishop Toronto City Airport to the city centre?

Getting from Billy Bishop Toronto City Airport to downtown Toronto is simple, thanks to the city’s public transportation system. Taxis are an option, and they are plentiful in such a large city. There is a cab stand directly in front of Billy Bishop Airport, so finding one after your flight in is easy. The public transport system, TTC, doesn’t serve Billy Bishop Airport directly. However, it is a short walk from the airport at the intersection of Lakeshore Boulevard and Bathurst Street. Here, you’ll find the streetcar stop, which can take you to various places around the city. The free option is the shuttle bus, which runs from the Billy Bishop Airport to the Fairmont Royal York. This stop is just across from Union Station, which can take you nearly anywhere else in Toronto. From this main transit hub, you can grab a train, subway, or bus.

What are some things to do in Toronto?

As a major Canadian city, Toronto offers plenty to do. Ripley’s Aquarium of Canada features over 16,000 freshwater and saltwater species. As Canada’s largest indoor aquarium, it’s sure to entertain, so be sure to allow several hours to take it all in. It’s also great for families, as there are features that cater to children, such as programs that allow children to touch a shark or swim with stingrays. For more of a cultural experience, you can visit the Soulpepper Theatre. Located in the historic Distillery District, this theatre hosts some of Canada’s most talented actors and singers. And for those wanting to party late into the night, there’s The Garrison, where featured DJs and musicians entertain. For a relaxing getaway, the Scarborough Bluffs are located just outside Toronto. The shoreline is breathtaking, with beautiful sandy beaches. There are also bike trails and parks, making it an ideal place to unwind and get outside for an afternoon. There’s also beach access, so if you bring your swimsuit, you can enjoy a swim.

Do I need a passport or visa to fly to Billy Bishop airport, Toronto?

Since Toronto is located in Canada, there’s no requirement for passports if traveling from another location in Canada. US citizens do require a US passport to enter into Canada, and visas are not necessary if staying less than 180 days.

How popular are flights to Toronto Island (YTZ) this year?

Toronto Island Airport has seen a 11% increase in demand for flights to the city compared to last year.

See alternative destinations where airfare is generally forecast to be close to Toronto Island flight prices. 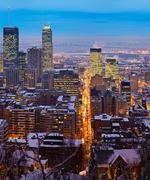 Not set on Toronto Island? See the cheapest flights to Canada. Airfare prices updated on January 27, 2022.