The best prices found for YXU flights for December, January

Cheap flights to London, Ontario found for this year

Late deals on round-trip flights to London, Ontario, departing today and this week

The cheapest ticket to London found for each month in 2021 based on historical flight searches by Cheapflights users.

When is the best time to fly to London Airport?

Average London flight ticket prices and weather conditions for 2021 and 2022 by month.

Flying to London in March is usually considered the best time to fly. However, you will find other deals are always available year round. If you are looking for warm weather when you arrive off of your flight to London then July is statistically the hottest. September is historically the period with most rainfall.

When is the best time to book a flight to London?

The price you pay for your flight to London may vary depending on when you book. For the best chance of a lower fare, look to book 61 days in advance of your trip. Fares are likely to increase in the final two weeks or so before your departure date.

Which day is cheapest to fly to London?

The cheapest flights to London are usually found when departing on a Tuesday. The departure day with the highest cost at present is Friday.

What time of day is cheapest to fly to London?

Flights in the afternoon are typically the cheapest time of the day to fly to London. Flights in the evening are usually the most expensive.

London, known as the Forest City for its greenness, is at the very heart of Southwestern Ontario. The city offers wonderful green spaces, a packed calendar of cultural events and festivals, and a lively downtown core. There are traces of the “other London” here too. The river is called the Thames, there is a Covent Garden Market, and you can take a tour in one of the iconic red double-decker buses.

About one million visitors take cheap flights to London each year, most of them in the summer months, to attend festivals such as Sunfest, the Home County Folk Festival and the London Rib Fest, Canada’s largest festival devoted to sticky and delicious ribs.

London’s parks are part of the fabric of the city. There are extensive bike (22km of paved paths along the Thames) and walking trails, wading pools and waterpads. Victoria Park is the lungs of the city, located right in the downtown core. It hosts the festivals and celebrations that make London such a vibrant destination.

A short drive away are the historic sites, theatres, provincial parks and freshwater beaches of Shakespeare Country, this part of Canada that celebrates the heritage of one of its founding nations.

The climate is continental. Summers are warm to hot – and humid. The winters are cold. London has the distinction of having the most thunderstorms of any Canadian city.

When is the best time to fly to London?

Peak Season:
The summer months are high season. This is when most travellers arrive on cheap flights to London.

For travellers who intend to travel around Ontario, renting a car is best. London is an easily navigable city with a north-south/east-west grid layout.

The London Transit Commission offers regular bus services throughout the city. Fares are about $2.50 per adult, $1.25 for children.

There are well-marked bike and walking trails throughout London.

What airport do you fly into for flights to London?

Most people fly into London (YXU) if they book a flight to London. London is conveniently located just 8.6 km from London’s city centre.

See alternative destinations where airfare is generally forecast to be close to London flight prices. 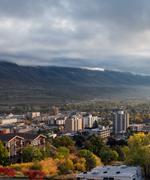 Find the best London flight deals for you

Cheap tickets to London found by our users in Canada as recently as December 07, 2021.

Other local departures to London from Canada

Not set on London? See the cheapest flights to Canada. Airfare prices updated on December 07, 2021.