Flights to Edmonton in 2022

The best prices found for YEG flights for June, July

Cheap flights to Edmonton found for this year

Late deals on round-trip flights to Edmonton, departing today and this week

What is the cheapest month to fly to Edmonton?

The cheapest ticket to Edmonton found for each month in 2022 based on historical flight searches by Cheapflights users.

When is the best time to fly to Edmonton Airport?

Average Edmonton flight ticket prices and weather conditions for 2022 and 2023 by month.

When is the best time to book a flight to Edmonton?

Booking 61 days in advance of your planned departure date is, on average, the best time to get cheap flights to Edmonton. The general trend is that the closer you book to the departure date, the more expensive your flight will be.

Which day is cheapest to fly to Edmonton?

The cheapest flights to Edmonton are usually found when departing on a Thursday. The departure day with the highest cost at present is Sunday.

What time of day is cheapest to fly to Edmonton?

Flights in the afternoon are typically the cheapest time of the day to fly to Edmonton. Flights in the morning are usually the most expensive.

When to fly to Edmonton

A four-season destination, there’s no bad time to take cheap flights to Edmonton; it depends on what you want to do. Summer is when most of the festivals take place. These celebrations include Edmonton Gay Pride (June), Taste of Edmonton (July), Heritage Days (August) and CariWest (August).

Edmonton started off in 1795 as a fur trading fort established by the Hudson’s Bay Company. It’s kind of fitting therefore that the city is now home to North America’s largest shopping centre, the West Edmonton Mall.

There’s much more to this Alberta city than shopping however. It’s a booming staging point for oil sands projects in northern Alberta and diamond mining operations in the Northwest Territories. On top of that it is a noted city of the arts. There are more live theatres per capita than anywhere else in Canada, theatre festivals dot the summer calendar, and the performing arts community spans opera, ballet, symphony orchestra and jazz.

In 2007 it chalked up a designation as Canada’s Cultural Capital and its legendary hockey team, the Oilers, has collected five Stanley Cups so far.

Edmonton’s greenness is legendary too. A green belt runs through the city and there are hundreds of kilometres of trails for walking, running, cycling and rollerblading. In the winter months, chances to skate, go cross-country skiing or downhill skiing, are all just minutes of downtown.

Looking for additional flight deals? Check out prices from Ontario to Edmonton.

How long is the flight to Edmonton?

Where can you get direct flights to Edmonton from Canada?

There are several direct Edmonton flight deals available from major cities in Canada. Whether you are flying from Quebec City, Quebec to Edmonton, Air Canada, and WestJet offer several direct options to Edmonton International Airport. Winnipeg, Ottawa Gatineate, or Calgary, offers several options that are available for direct flights to Edmonton. Flair, Swoop, or Air Canada Airlines fly directly to Edmonton International from Toronto. Departing from Montreal, Air Canada is the airline that has a direct flight to YEG.

How do you get from Edmonton Airport to the city centre?

Skyshuttle provides transportation from Edmonton’s International Airport with room for groups or families and has a check-in desk area at the airport. It departs every 60 minutes on the hour for all South, University, Downtown and Kingsway locations and every 60 minutes half past the hour for all West End locations. A taxi ride to downtown Edmonton takes approximately 40 minutes, and the Edmonton Airport is served by several taxi services and limousines. A car rental is another option from Edmonton Airport to downtown Edmonton, many facilities are located in Level 1 of the parkade of the airport, and some do require advance reservations. Public transit, such as the Edmonton Transit System operates bus routes from the airport to the Century Park Station in South Edmonton, and then you can transfer to a train, bus or taxi to reach downtown Edmonton.

What are some things to do in Edmonton?

Downtown Edmonton offers several attractions, restaurants, shops, and more. The West Edmonton Mall is the world’s largest shopping and entertainment complex complete with a roller coaster, tropical rainforest, water tube river, an indoor bungee jump, in addition to over 800 stores and 20 restaurants. The Winspear Music Centre features concerts and shows located in Edmonton’s Arts District and is home to the Edmonton Symphony Orchestra. High-Level Street Bridge car is open seasonally and offers amazing views of the city and the river. Fort Edmonton Park features recreations of Edmonton in different stages of its history. The downtown area offers wine tasting and tours, museums, and a conservatory. Telus World of Science provides experience in science with interactive galleries, an IMAX Theatre, science stage, planetarium, special exhibitions and more. The science centre features interactive exhibition galleries for all ages and its planetarium is the largest in Canada and shows are included with science centre admission. The IMAX Theatre has the largest screen in Alberta and plays both documentary films and Hollywood movies. The centre hosts travelling feature exhibitions several times a year.

Do I need a passport or visa to fly to Edmonton?

A visa or passport is required for entry into Edmonton. You will need a visa or an Electronic Travel Authorization (eTA). Visa-exempt individuals from foreign countries who fly to and tour through Canada through a Canadian airport must have an eTA. An Electronic Travel Authorization (eTA) needs to be valid for up to five years or until the passport’s expiration date. You can apply for an eTA to Canada as many times as you want if your stay will be for six months or less.

Edmonton has a temperate climate. Winters (November to mid-March) are snowy; temperatures average -15 degrees Celsius (5 degrees Fahrenheit). Summers are dry and sunny with average temperatures of 17 degrees (62F). A treat for travellers arriving on cheap flights to Edmonton at the summer solstice (June 21) is a long, bright day – more than 17 hours.

When your cheap flight to Edmonton arrives, you can get into the city’s centre quickly and easily by hopping on the Sky Shuttle Bus. You can also take a taxi into town. Once downtown you can use the Light Rail Transit (LRT) or buses. Save some money by buying a day pass or ride the rails for free downtown.

What airport do you fly into for flights to Edmonton?

Booking a flight to Edmonton (YEG) is your only option if you intend on flying to Edmonton. It is only a 26.9 km journey from Edmonton to Edmonton’s city centre.

How popular are flights to Edmonton (YEG) this year?

This year has seen a 84% increase in flight searches for Edmonton.

See alternative destinations where airfare is generally forecast to be close to Edmonton flight prices. 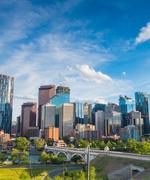 Find the best Edmonton flight deals for you

Cheap tickets to Edmonton found by our users in Canada as recently as June 23, 2022.

Other local departures to Edmonton from Canada

Not set on Edmonton? See the cheapest flights to Canada. Airfare prices updated on June 23, 2022.