When is the best time to fly to Darwin?

The dry season – April/May through September/October – is when most traveller’s take flights to Darwin. Travellers and locals can enjoy one of the most popular racing events in the Australian horse racing calendar, The Darwin Cup. The Northern Territory sees over 20,000 attendees gather each year to experience, not only eight fun-filled days of high quality racing, but also to enjoy top end hospitality, activities and entertainment.  The middle of the dry season is particularly busy. This is when schools are out and families holiday in the region. Expect large crowds during the last two and a half weeks of August, as the city sees more than 100,000 people travel to Darwin to get involved in the Darwin Festival. The festival was introduced to celebrate the state’s unique identity through an array of vibrant arts and cultural events that are performed outdoors in the Botanical Gardens. Residents and guests can enjoy an 18-day programme of theatre, music, dances, visual arts, workshops, film and comedy.

January, February and March are, in general, the off-peak season. This is the wettest time of the year and there’s also a good chance of cyclones and floods. However, many consider this the best time to visit and have the advantage of benefiting from cheap flights to Darwin. With the rains, the earth bursts into life. Flowers and plants bloom, animals mate and rivers fill up and run off onto teeming waterfalls.

Which day is cheapest to fly to Darwin?

The cheapest day to fly to Darwin is usually Sunday. At the moment, Wednesday is the most expensive.

Flights in the afternoon are typically the cheapest time of the day to fly to Darwin. Flights at noon are usually the most expensive.

Darwin is a fast-growing city that is full of history, which gives it a unique cultural heritage. Today, more than 50 nationalities share an easy-going lifestyle in this cosmopolitan city.

Darwin might just be the ultimate budget-break destination. There is so much about Darwin that’s not about spending money. Travel to Darwin during the wet season and nature puts on its own show. Watching the sky turn indigo as storms roll in over the harbour, basking under the flaming gold skies at sunset, oohing at the spectacular lightning shows or listening to the sound frogs croaking late into the night – all are wonderful and free.

For people planning on booking flights to Darwin, heat and humidity are the defining characteristics of this part of the Northern Territory’s tropical climate. The average year-round temperature is 32 C and there are two seasons. The dry season runs from April/May to September/October and has warm, sunny days and cool nights. The wet season starts at the end of the year and gets wetter and wetter – the months of January, February and March are when most rain falls.

It has often been said that Darwin is the only capital city in the country where you can cross the main street blindfolded at any time of the day (however, we don’t recommend trying that). Visitors to Darwin will discover that much of it is small enough to walk or bike around. Driving around Darwin is easy too. The layout is simple, traffic is generally light and parking is plentiful. There is a tourist bus called the Tour Tub that stops off at Darwin’s ten major destinations including Fannie Bay Gaol, George Brown Darwin Botanic Gardens, Indo Pacific Marine and the Australian Pearling Exhibition.

Many visitors may want to rent a car after their flight to Darwin International Airport (DRW). Alternatively a Shuttle Bus travels between the airport and hotels in Darwin city and bus/coach charters are also available. Visitors can also pick up a taxi from the taxi rank in front of the Terminal building. 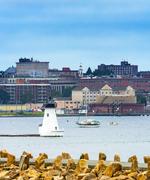 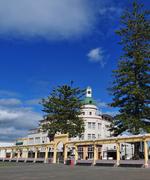 Other local departures to Darwin

Canada to Darwin
Toronto to Darwin