The best prices found for DEN flights for January, February

Cheap flights to Denver found for this year

Late deals on round-trip flights to Denver, departing today and this week

Can I fly to Denver Intl from USA right now?

Most visitors from USA need to provide a negative COVID-19 test result and/or quarantine to enter Denver Intl.

Quarantine requirements
Visitors from USA are not required to quarantine after entering Denver Intl.


Can I fly back to USA from Denver Intl?

Returning to USA from Denver Intl

Quarantine requirements
Visitors from Denver Intl are not required to quarantine after entering USA.

The cheapest ticket to Denver found for each month in 2022 based on historical flight searches by Cheapflights users.

When is the best time to fly to Denver Intl Airport?

Average Denver Intl flight ticket prices and weather conditions for 2022 and 2023 by month.

Whilst there are several times of the year to choose from, March is seen as the time to fly to Denver, however, it is possible to get good deals throughout the year. If weather is an important factor for you when considering when to fly to Denver, the warmest period tends to be July, with the wettest being August.

When is the best time to book a flight to Denver?

The best time to book flights to Denver is 48 days before your desired departure date. The cost of your flight will likely increase significantly if you book two weeks in advance of your flight.

Which day is cheapest to fly to Denver?

The cheapest day to fly to Denver is usually Wednesday. At the moment, Sunday is the most expensive.

What time of day is cheapest to fly to Denver?

To get the best value, try booking a flight in the morning when visiting Denver. Generally the prices will increase for flights at noon as these tend to have higher demand.

Colorado’s capital might be best known for its ski resorts and breathtaking scenery, but visitors will discover just how much more the city has to offer.

The Mile High City – at 1,600 metres officially – gets 300 days of sunshine a year, more than Miami. It embraces its cowboy past – William F. Cody (Buffalo Bill) is buried just 30 minutes from the city after all – its mining heritage and its great outdoors, but is a bang-up-to-date cosmopolitan arts and cultural city too.

Its Daniel Libeskind-designed Denver Art Museum is home to collections of African, American Indian, European and American, and Modern art, while the Museum of Contemporary Art focuses on art created since 1945.

Lower Downtown, LoDo to the locals, is a lively, historic district with bars, restaurants, microbreweries and book shops.

The Rocky Mountains offer a majestic backdrop, nature’s playground for those taking cheap flights to Denver for the camping, hiking, bicycling, fishing and, of course, the skiing, in the ten national parks or 11 national forests on the city’s doorstep.

Despite Denver’s reputation as a ski paradise, the city does not have very harsh winters. Denver nestles in the foothills of the Rockies, on the high plains. The Chinook winds warm up the city to average temperatures that are well above other cities on the same latitude. Travellers considering taking cheap flights to Denver might be surprised to learn that Denver gets more sunshine each year than Miami or San Diego. Temperatures do not soar to the 100 degree mark, instead Denver enjoys a warm climate with low levels of humidity year round.

You can walk around downtown Denver easily or take public transportation. The 16th Street Mall has a free bus service running down the length of it. It stops every two blocks. To get around Denver, its suburbs and outlying communities, like Boulder and Evergreen, you can take the Regional Transportation District (RTD). It offers bus and light-rail services and has free transfer tickets, but you’ll need exact change. A great way to sightsee is hopping on the open-air Platte Valley Trolley, which has half-hour tours on its “Denver Sightseeing Route” in the warmer months. If you’re heading out of town for the day, you’ll need to rent a car. Be mindful of driving conditions during winter; storms can make driving treacherous.

Denver International Airport (DEN) is one of the largest airports, both in the United States and in the world. It is also one of the top ten busiest airports worldwide. Denver International Airport’s beautifully constructed rooftops, which are said to resemble the snow-capped peaks of the Rocky Mountains, are conveniently located just 25 miles (40km) from downtown Denver.

An airport the size of Denver International is sure to have ample shopping opportunities for both domestic and international travellers. Passengers using the airport who are not keen on shopping will find that there are many other activities and distractions at the airport, including beautiful views of the Rocky Mountains and a number of commissioned art pieces located throughout the terminal buildings.

An airport the size of Denver International Airport is sure to impress even those travellers who think they’ve seen it all. However, it seems that this airport goes one step further. Not only does the design of the airport highlight the natural beauty of the surrounding landscape, but it also has an environmental management system in place that aims to make the airport itself a more environmentally-friendly place – perfect for travellers wishing to keep their carbon footprint in mind.

What airport do you fly into for flights to Denver?

Most people fly into Denver Intl (DEN) if they book a flight to Denver. Denver Intl is conveniently located just 29.7 km from Denver’s city centre.

See alternative destinations where airfare is generally forecast to be close to Denver flight prices. 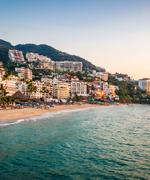 Find the best Denver flight deals for you

Cheap tickets to Denver found by our users in Canada as recently as January 22, 2022.

Other local departures to Denver Intl from Canada

Not set on Denver? See the cheapest flights to Canada. Airfare prices updated on January 22, 2022.