Which day is cheapest to fly to Tasmania?

Tuesday is currently, on average, the cheapest day to fly to Tasmania. Flying on Wednesday will result in higher flight prices.

To get the best value, try booking a flight in the morning when visiting Tasmania. Generally the prices will increase for flights in the afternoon as these tend to have higher demand.

Travellers taking cheap flights to Tasmania are spoiled for choice when it comes to destinations and activities. This small island is remarkably diverse and wonderfully wild.

Hobart, the capital, has the heritage as well as the stunning setting and, within a 90-minute drive, beautiful, bird-full Bruny Island and Port Arthur, the historic former penal settlement. Along the east coast – which has the mildest weather – the beaches are pristine, white-sanded and lapped by the bluest of seas.

Launceston, Tasmania’s second city, is in the north. It boasts the Cataract Gorge and, thanks to the bounty of the Tamar Valley, a reputation as a foodie city. Across the island, to the west, small villages give way to the Tarkine wilderness and the World Heritage Area, which accounts for about 20 per cent of Tasmania.

Tasmanians like to say that the island gets all four seasons in one day, but it has a mild, maritime, climate with plenty of rainfall. On the east coast, Hobart, for example, gets an average of 630mm, making it Australia’s second-driest capital city (after Adelaide). The west coast gets four times that, about 2,400mm per year.December-March are the warmest months with temperatures between 17 and 23 degrees. May through August is winter; temperatures hover between 3 and 11 degrees.

When to fly to Tasmania

Summer (December to February) is high season, when most travellers take cheap flights to Tasmania.

Winter – May to August – is low season.

The autumn and spring months – March and November – are shoulder season, but the weather can be unpredictable. However, if you brave the elements you can save on flights and accommodation. 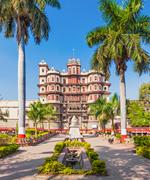