When is the best time to fly to Algiers?

September is typically the best time to fly to Algiers, but there are other times where great deals are available. If weather is an important factor for you when considering when to fly to Algiers, the warmest period tends to be August, with the wettest being November.

When is the best time to book flights to Algiers?

Booking 60 days in advance of your planned departure date is, on average, the best time to get cheap flights to Algiers. The general trend is that the closer you book to the departure date, the more expensive your flight will be.

Which day is cheapest to fly to Algiers?

The cheapest day to fly to Algiers is usually Monday. At the moment, Wednesday is the most expensive.

At the moment, flights at noon are likely to offer the best value for money for your Algiers trip. A flight in the morning will more often than not be of higher cost.

Algiers doesn’t have distinct low or high tourist seasons as such. However, during popular holidays and festivals, such as Independence Day on 5th July or during Muslim holidays, hotel accommodation and flights to Algiers may be more expensive. In terms of climate, Algiers is very similar to other destinations in the Mediterranean. An ideal time to visit Algiers is during the months of June, July, August and September, when the city enjoys an average high temperature of between 27 and 31 degrees, with August being the hottest month. A great reason to visit Algiers in September is the Pan-African Cultural Festival which is dedicated to showcasing the rich and diverse cultural heritage of African countries. The festival features performances, exhibitions and events that take place throughout the country with more than 8,000 artists, musicians, authors and actors from the African Union who come together in Algeria to promote the arts.

In comparison, the months of November, December and January have average temperatures of between 16 and 20 degrees; January being the coolest month. While temperatures are colder than the scorching summer months Algiers hosts an annual Marathon des Dunes in mid-April. Book in advance for cheap flights to Algiers if you want to watch or participate in the marathon, as this sporting event attracts runners from all over the world. Runners compete in a three-leg 42km race that takes place in the Sahara desert. Competitors can either complete the race over the three days by walking or running, which invites individuals of all fitness levels to get involved. If you don’t fancy participating in the run, it is still worth looking for cheap flights to Algiers around this time to experience the cultural programmes running alongside the Marathon for all the family to enjoy such as excursions to museums, historical sights and religious temples. Every evening participants can also enjoy tasting local delicacies and listening to local folk bands.

The capital city of Algeria lies on the banks of the Mediterranean Sea and has a rich history dating from Phoenician times. Given its sometimes violent history, this beautiful city is an exciting flight destination for intrepid travellers. One of the main reasons people fly to Algiers, other than for business, is for the opportunity to experience a North African culture that remains relatively undiluted by tourism when compared to the likes of Marrakech and Tangiers. A key attraction the city has to offer is the beauty of its architecture and natural scenery which different cultures, including the Romans, Ottomans and French, have helped shape over the centuries. The city is affectionately nicknamed ‘Algiers la blanche’ (the white) in recognition of the stunning white buildings that shine in the sunlight. When taking a flight to Algiers, be sure to make time to see The Kasbah, a UNESCO World Heritage Site and a must-see destination. Located in the northern part of the city, it is a living time-capsule that transports visitors back to the 16th century. Best explored with the help of a guide, many visitors spend an entire day simply exploring the narrow streets or sitting in one of the numerous cafes tasting the delicious Algerian coffee and lamb dishes on offer. Also located inside the Kasbah is the Great Mosque of Algiers. It is the oldest mosque in Algiers and its minarets are said to date from the early 1300s. Outside the Kasbah and representing the French influences on the city, Notre Dame d’Afrique is another very popular tourist destination. Overlooking the bay of Algiers, it was built in 1872 to provide a place of worship for Catholics.

If taking a flight to Algiers you will land at Houari Boumediene Airport (ALG). Also known as Algiers Airport, it is located 10.5 miles (17km) from the city. There is a half-hourly bus service that runs from the airport to the city centre. Alternatively, you could take a taxi. It’s advisable to negotiate a fare before entering the taxi. Registered taxis should have the taxi registration number on outside of the driver’s door, it is good practice to avoid any unregistered taxis if possible. 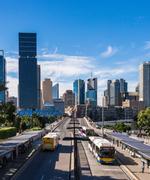 Prices found by our users for local departures to Algiers

Other local departures to Algiers