January
C$ 591
February
C$ 553
March
C$ 573
April
C$ 561
May
C$ 565
June
C$ 587
July
C$ 601
August
C$ 626
September
C$ 621
October
C$ 634
November
C$ 629
December
C$ 729
Currently, February is the cheapest month in which you can book a flight to Oakland. Flying to Oakland in December will prove the most costly. There are multiple factors that influence the price of a flight so comparing airlines, departure airports and times can help keep costs down.

When is the best time to fly to Oakland?

C$ 700
C$ 620
C$ 530
C$ 441
February is typically the best time to fly to Oakland, but there are other times where great deals are available. September tends to be the warmest period in Oakland so if you are looking for sun or warmer climates then look to fly around this time. December is the wettest if you need to factor this in to your plans.

When is the best time to book flights to Oakland?

The best time to book flights to Oakland is 60 days before your desired departure date. The cost of your flight will likely increase significantly if you book two weeks in advance of your flight.

Which day is cheapest to fly to Oakland?

The cheapest flights to Oakland are usually found when departing on a Wednesday. The departure day with the highest cost at present is Monday.

Oakland flights can be made cheaper if you choose a flight at noon. Booking a flight in the evening will likely mean higher prices.

Located only a few miles from the San Francisco border, Oakland is one of the most famous sister-cities in California. However close to San Francisco it may be in miles, Oakland is far from the eccentricity of its neighbouring bay city. Oakland is one of the busiest industrial ports on the West Coast and while its working-class personality remains the heartbeat of the city, “Oak-town” welcomes a slew of visitors every year who enjoy taking part in the simpler Californian lifestyle.

Book flights to Oakland during sports season and catch the MLB’s Oakland Athletics or the NFL’s Oakland Raiders in action at the Oakland Coliseum. Outdoorsy travellers will enjoy a sailboat ride along Lake Merritt or a stroll through one of the many outdoor festivals that Oakland puts on every summer. Don’t dismiss Oakland as second-rate city just because it’s neighbouring San Francisco is a mecca for entertainment – Oakland has some of the best shows, theatre, and museums California has to offer.

The Oakland weather is cool to mild throughout the year, with foggy summers and wet winters. Summers in Oakland (between June and September) are cooler than other parts of inland California and winters (December to February) are mild during the day, with temperatures seldom dropping below 10 degrees.

When to fly to Oakland

Peak season is normally dictated by school holidays and family travel plans around them. Flights to Oakland are packed in the summer time and most major attractions are full with tourists. Christmas season and the New Year are also peak times to travel to Oakland.

Oakland sees a dip in tourists between September and June when school is in session. However, this is also a good time to book cheap flights to Oakland if you want to avoid crowds.

You can get to and from San Francisco to Oakland on the city’s BART system. It has one of the longest underwater transit tunnels in the world, taking you under the bay to San Francisco city. Fares are reasonable and children at the age of four and under ride for free. The trains run all week long, but times vary on the weekends, so check one of the schedules posted around the city. 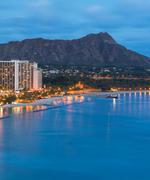 Prices found by our users for local departures to Oakland

Other local departures to Oakland