When is the best time to book flights to Chania?

The price you pay for your flight to Chania may vary depending on when you book. For the best chance of a lower fare, look to book 42 days in advance of your trip. Fares are likely to increase in the final two weeks or so before your departure date.

Which day is cheapest to fly to Chania?

The cheapest day to fly to Chania is usually Sunday. At the moment, Thursday is the most expensive.

At the moment, flights in the evening are likely to offer the best value for money for your Chania trip. A flight at noon will more often than not be of higher cost.

When is the Best time to Visit Chania?

Temperatures rise between the months of June and August, which see an average high temperature of 29 degrees Celsius and an average low temperature of 20 degrees. As the warm and sunny weather sets in, throngs of tourists appear in the city. This is turn can see prices increase, so it is advisable to arrange flights and accommodation in advance. If you do book your flight to Chania during the summer months then you’re in for a treat. From late July to late September, the city hosts a number of cultural events, including, theatrical nights, art exhibitions, concerts and traditional music and dance performances.

If you’re not a fan of crowds and would prefer a slightly cooler alternative, then the months of April and October, offer a more comfortable holiday, although you’ll still be able to experience clear sunny days. Bare in mind these months and especially October, can see an increase in rainfall.

Tourism slows in the winter period (December to February) when temperatures are on average between 8 and 15 degrees. Rain is also more common during this time. If you don’t mind the weather then this is a good time to look for possible cheap flights to Chania and affordable hotel rates.

Chania is the epitome of a traditional Greek city, a flight to Chania will take you to a place where visitors can lose themselves within narrow winding streets and discover ancient remnants of lost civilisations. Once the capital of the Cretan State, Chania is a popular tourist destination for those looking for a beautiful waterfront setting surrounded by crumbling buildings and waterside cafes. The city is located on the northern coast of Crete and is the site of an ancient Minoan settlement. This is a city where ancient and modern architecture meet in two distinct areas. The old town draws in many tourists who come to explore the picturesque historic squares and narrow alleyways that were built in the Venetian and Turkish periods, such as the main Eleftherios Venizelos Square. The old harbour and seafront provides a wonderful atmospheric backdrop during daytime or evening, when the local nightlife comes alive. After exploring the historic streets of the old town, take a stroll along the harbour wall leads to the Venetian Lighthouse, one of the oldest of its kind in the Mediterranean. Although no longer operational, it is a popular visitor attraction that is best seen when lit up at night. If you want to see displays of ancient artefacts from local excavations, a visit to the Archaeological Museum is an excellent way to learn about the history of the local area and its early civilisations. Although there is plenty to do in Chania, many visitors who take a flight to Chania also choose to venture beyond the city to see some of the surrounding areas of natural beauty. One of the most famous of these is Samaria Gorge, a magnificent landscape, which can be traversed on foot. The 8-mile (13km) walk down the gorge descends to the shores of the Libyan Sea, where you can choose to sail to the village of Sougia before returning to Chania city.

When to fly to Chania

The Mediterranean climate of Crete delivers hot summers and mild winters, allowing visitors to enjoy the island’s attractions all through the year.  Temperatures rise between June and August and so do the throngs of tourists, so cheap flights to Chania become less available as the prices rise accordingly. If you prefer a cooler alternative, the months of April to October offer clear sunny days that are considerably more comfortable.

Tourism slows in the winter period when temperatures are lower, so to find a cheap flight to Chania try to book between December and February.

Local taxis can be hired within the city. If you want to travel further afield, a regular bus services travel to other major towns and tourist spots.

How to get to the City from the Airport

Chania International Airport (CHQ) is 8.5 miles (14 km) from the city centre, but there is a taxi rank located outside the terminal building. Bus transfers to the city take about 30 minutes, or you drive yourself by booking with one of the main car hire companies. 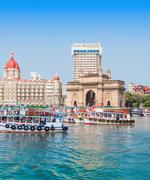 Other local departures to Chania